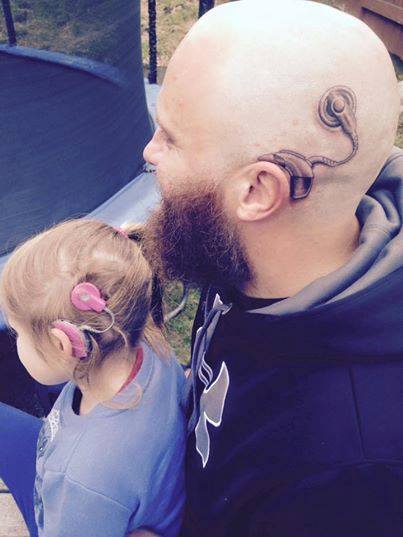 A Taupo dad has gotten a cochlear implant tattooed on his head to help his little girl not feel like the odd one out.

Charlotte, 6, who had her first implant put in at the age of 4 in 2013, has just had her second one put in at Gillies Hospital.

In a gesture of support, her father, Alistair Campbell, had his own “implant” tattooed on the left side of his head, three days ago.

Mr Campbell, who had no other tattoos, said he wanted to do it to show her that he could go through a little bit of pain for her too.

Mr Campbell had shaved his head completely to get the tattoo done but said he would be letting his hair grow back.

He’d shave it off again and show off the tattoo at “special occasions,” or if Charlotte wanted to see it.

When Charlotte saw her dad’s version of a cochlear implant she giggled, touched it and told him it was “cool”.

Charlotte’s mum, Anita Campbell, wasn’t so sure her daughter had quite grasped the significance of the tattoo yet.

She hoped her daughter’s latest implant in her right ear would further “enhance her life”.

Mrs Campbell’s mother had a cochlear implant and her second-son, Lewis, 8, wore hearing aids so she wasn’t surprised when Charlotte was diagnosed.

She said things were a bit “up and down” for a while as the diagnosis evolved from just a mild hearing impairment, to the news Charlotte was profoundly deaf in her left ear and had a condition which limited the ability to transmit sound to her brain in her right.

“She wouldn’t talk to anybody to pretty much a social butterfly,” she said.

The Hearing House fundraising and communications manager, Mary Jane Boland, said this second implant would give Charlotte “more sound” and help her better distinguish the direction it’s coming from.

“But the key thing is Charlotte does all the things hearing kids can do,” she said. “She lives a really ordinairy life.”

A photo on Twitter showing Mr Campbell, holding his daughter, with the picture of the implant tattooed on his otherwise bald head, has gone viral on social media.

People from as far afield as France and Germany praising Mr Campbell for the tattoo.

Filip Dakic tweeted, “Wow. Respect! Getting through it together with his daughter.”

8 thoughts on “Dad Gets Tattoo For Daughter”